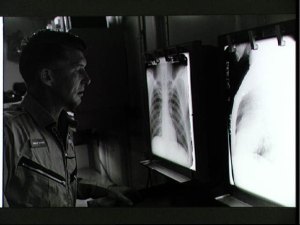 In a previous post, I’ve talked about some of the challenges facing the Mercury program managers in selecting the first group of astronauts. No one knew with any certainty what the first men in space would be up against. As such, the search for the perfect men was a multi-stage process taking into consideration as many possible scenarios as program managers could envision. One of the more interesting problems in selecting NASA’s Mercury astronauts was their level of fitness – they obviously had to be in physical shape to survive the challenges of spaceflight, but how physically demanding was a mission in a capsule too small to afford the astronaut much movement? (Pictured, Wally Schirra examines his chest x-rays. 1962.) END_OF_DOCUMENT_TOKEN_TO_BE_REPLACED 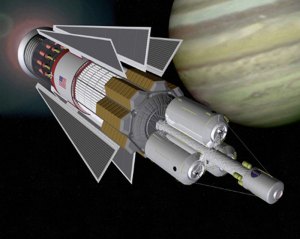 In previous posts, I’ve talked about some of the challenges associated with a proposed manned mission to Mars, particularly the difficulty of landing on the red planet. But getting men to Mars is also difficult, although not impossible.Transit time for a mission to Mars is measured in months instead of days; the fastest transit is currently in the neighbourhood of 180 days or six months. For robotic landers and rovers, this transit time poses no great challenge. As long as batteries can keep the mechanical joints and systems from freezing, a robot doesn’t mind the wait.  (Pictured, an artist’s rendition of a nuclear pulse rocket nearing Jupiter.)

A manned mission is another story. Keeping that crew alive and in good physical form complicates a trip to Mars; its not as simple as providing the astronauts with a heat source. Six months is a long time for a crew to sit and wait in a small cramped spacecraft, exposed to radiation and in a zero-gravity environment.  There are ways to protect the astronauts with radiation shields and spinning the spacecraft to create enough gravity to prevent or at least limit the effects of muscular atrophy. But the best way to overcome the challenges of getting men to Mars is to simply shorten the transit time. This isn’t a new idea, it’s one NASA has been researching for over 50 years. The favoured method is a nuclear rocket.  END_OF_DOCUMENT_TOKEN_TO_BE_REPLACED