This morning, China took a significant step forward towards its goals in space with the launch of Tiangong 1 (pictured), a prototype of the nation’s planned space station. China is only the third nation to launch manned flights using its own technology, and these initial steps towards a space lab suggest that China will soon solidify its place as a major player in space. What might this mean for NASA, a new ally or another space race? My original article can be found on motherboard.tv, but I’m curious what others think so I’ve reblogged the article here.  END_OF_DOCUMENT_TOKEN_TO_BE_REPLACED

Decades make great sales tools. Kennedy used a decade timeframe to sell American on the moon in 1961. Robert Zubrin recently tried the same pitch and called for a manned mission to Mars by the end of a decade (Zubrin’s been pitching a decade-long manned Mars program since the 1980s to no avail). A decade is a nice  round number, and when you’re at the start of a decade – like the year 1961 or 2011 – people (namely Congress and taxpayers) can easily contemplate the end of a decade as a timeframe. But it isn’t  only large-scale manned programs that use a round decade as a sales tool. Recently, the National Research Council’s Committee on Planetary Science in cooperation with NASA released an outline of its planetary goals for the coming decade. Where Mars in concerned, there is a pretty impressive program in the works from 2012 to 2023. But unlike the moon landing, bottomless funding isn’t going to achieve the goals at any cost. Instead, the next decade on Mars (pictured) will face certain challenges to meet the decadal goal.  END_OF_DOCUMENT_TOKEN_TO_BE_REPLACED

Welcome to another installment of the Carnival of Space! Some neat things on the table this week, so let’s get to it. (Not exactly a hover craft, Dave Scott practices how to manoeuvre in anticipation of an EVA. If you look closely, it appears as though he’s doing this training in a shirt and tie. 1962.) END_OF_DOCUMENT_TOKEN_TO_BE_REPLACED 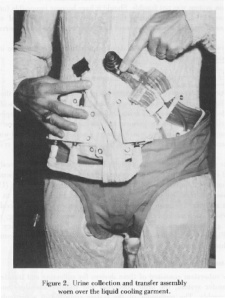 For the past few months, I’ve been contributing short articles to Motherboard. This week, I worked on a fun one I thought I ought to share: how to go to the bathroom in space and on the moon. I’ve put together a very brief history of the addition of ‘restroom facilities’ into NASA’s space race era missions. Check out the full article.

(Pictured, a diagram showing the Apollo urine collection and transfer system as it is meant to be worn over the liquid cooled undergarments.)

In a previous post, I made the comment that I don’t necessarily think humans ought to colonize other planets; at least, not until we know a lot more about the environment upon which we intend to force ourselves. Manned exploration is another story. Sending men to another planet to survey the environment is much simpler than trying to replicate a man’s honed skills and keen mind in a machine – aside, of course, from the challenges associated with getting him there in the first place. Such tools exist on the recently silent Mars Exploration Rovers (MER) Spirit and Opportunity. But the rover’s tools serve an unlikely second purpose. They stand as a tribute to those lost during the terrorist attacks on the World Trade Centre on September 11, 2001. (Left, MER rover Spirit captures its own shadow. Mars, 2004.) END_OF_DOCUMENT_TOKEN_TO_BE_REPLACED

Conspiracy theorists have concocted some incredibly creative stories to explain why NASA has not returned to the moon since Apollo 17’s splashdown in 1972. Some suggest that aliens on the moon prevented or scared astronauts from ever returning while others claim that there were undocumented missions to the moon. The other end of the spectrum sees moon hoax theorists claiming we never went to the moon, but the ‘evidence’ of these claims is so great it really deserves its own post. (Left, Apollo 17 commander Gene Cernan was the last man to leave a boot print on the moon. December 1972.)

Last week, Dimension Films released Apollo 18. Conspiracy theorists are coming out of the internet’s virtual woodwork in droves, lauding the film for finally admitting to the decades-old cover up. The real story of Apollo 18 is interesting but much less exciting.  END_OF_DOCUMENT_TOKEN_TO_BE_REPLACED