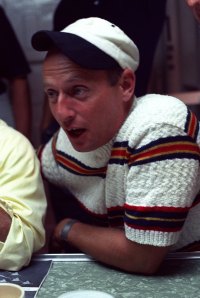 When faced with a Rorschach test – the famous inkblots cards that are supposed to give a psychologist deep insight into your psyche – how are you supposed to answer? For the Mercury astronaut candidates, they knew their answers could make or break their careers. Most read the cards as truthfully as possible while others gave answers they assumed the doctors wanted. Pete Conrad took a different approach. (Left, Conrad enjoys down time during water egress training in the Gulf of Mexico. September 1969.) ‘Vintage Space Fun Facts’ are a new feature. These occasional shorter articles will be a great way to share the anecdotes and human stories I come across in my research.

Following extensive medical testing at the Lovelace Clinic in New Mexico, Mercury astronaut candidates were subjected to equally intensive psychological testing at the  Wright-Patterson Air Force Base in Dayton, Ohio. After all, the motivations of men willing to go into space on top of a missile were somewhat suspect. Where they insane? Adrenaline junkies? Suicidal?

Skepticism reigned among candidates. The candidates weren’t supposed to talking about the tests – that would affect the results. But they were test pilots. Rules be damned. 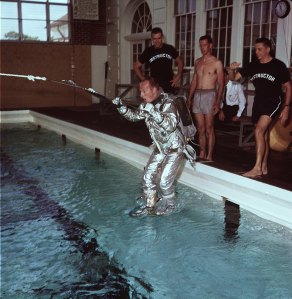 One night over drinks – generous portions consumed between 11:50 and 11:59 since they were ordered to fast after midnight – candidates Alan Shepard and Pete Conrad discussed the Rorschach test.

No one was totally sure what the doctors wanted in an answer, but the candidates were convinced there was a right and a wrong way they could interpret the cards. Shepard for one was convinced virility was what the doctors wanted in astronauts. The night over drinks he advised Conrad to describe something sexual in every inkblot he was given. (Conrad participates in Water Survival School as part of his Gemini training. 1963.)

Conrad took the advice to heart. Sitting in a room with a psychiatrist, he easily identified the first few cards as images of the female sex organ. Asked to contextualize an intimate scene between a couple he saw in another card, he fed the doctor a story about a nobleman’s daughter and a knight whose chain-mail pants were down around his ankles. 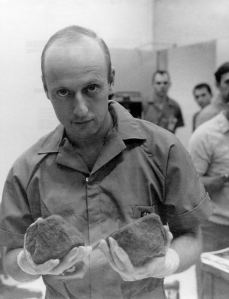 Smirking, the doctor held up a final card for Conrad to describe. It was blank. Conrad squinted at the card deep in thought before admitting defeat. He couldn’t see anything in the card.

“Because you’ve got it upside down,” Conrad replied with a straight face.

Pete Conrad was rejected from the Mercury program; his personality was deemed unsuitable to long duration space flight. He joined NASA in the second group of astronauts in 1962, walked on the moon as the commander of Apollo 12, and spent a total of just under 50 days in space. So much for being psychological unfit for spaceflight! (Left, Conrad displays two rocks he collected during his time on the moon on Apollo 12. 1969.)

Nancy Conrad and Howard A. Klausner. Rocketman: Astronaut Pete Conrad’s Incredible Ride to the Moon and Beyond. Penguin Books: London. 2005.