I got an email from a reader a few months ago who was particularly pleased that an old post mentioned his father, Don McCusker. McCusker was a North American Aviation test pilot and one of the few men to fly the full scale Gemini manned Test Tow Vehicle (TTV), the full scale Gemini spacecraft mated to the paraglider wing. Some research in unusual places, and a fascinating correspondence with his wife Helena, gave me fairly good picture of McCusker’s life. So while my research isn’t quite finished, I thought I’d write a short overview of the very interesting life of a test pilot that almost no one knows about. (Left, the Martin-built B57 that was used in research and development tests of a guidance systems. Don McCusker is on top, at the time serving as manager of the simulated MACE program. USAF.)

END_OF_DOCUMENT_TOKEN_TO_BE_REPLACED 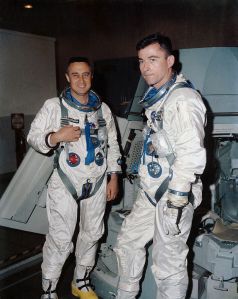 On March 23, 1965, Gus Grissom and John Young launched on the first manned Gemini mission, Gemini 3. First planned as a followup to Mercury known as Mercury Mark II, development of the Gemini spacecraft took nearly six years. The finished product was an expression of what Grissom wanted in a spacecraft, from the cockpit layout to the placement of each switch and instruments. It was, in many ways, his baby. Grissom’s close hand in its design prompted many of his fellow astronauts to call NASA’s second-generation spacecraft the Gusmobile.  (Left, the Gemini 3 crew, Gus Grissom and John Young in 1965.) END_OF_DOCUMENT_TOKEN_TO_BE_REPLACED 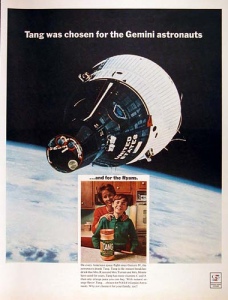 When people think about what NASA has done for the Earth-bound among us, most cite the invention of space foam and Tang among its greatest accomplishments. That’s not entirely true. Offshoots of technologies NASA has developed have given us things like LASIK eye surgery and the ability to turn on appliances remotely from our smartphones. Also, NASA didn’t invent Tang. But Tang’s story does run parallel to NASA’s. (Left, a 1960s advertisement for Tang with an image of a Gemini spacecraft in orbit that draws a comparison between the astronauts and the average consumer. Clever marketing.) END_OF_DOCUMENT_TOKEN_TO_BE_REPLACED 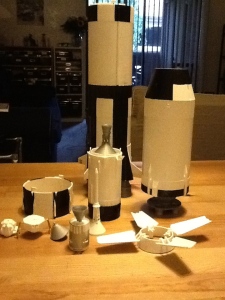 I recently built my first model — a 1:144 scale Saturn V. I posted this picture of the painted but unassembled rocket online, and it wasn’t long before I got an email from a fellow space-enthusiast. He asked about the paint scheme I used. He used the same design on a model years ago, and neither of us followed the paint scheme of any Saturn V that actually flew. I’d been so distracted following the directions and getting the lines straight that I didn’t stop to look at where the lines were going. It got me thinking about the Saturn V’s design scheme, which might be one of the more interesting histories of paint. Turns out, most of the readily accessible information is geared towards model builders. That’s all well and good, but it didn’t tell me why German-built launch vehicles have always varied their paint scheme.  END_OF_DOCUMENT_TOKEN_TO_BE_REPLACED

Apollo 8 is usually synonymous with Christmas — at least among spaceflight enthusiasts. In 1968, NASA made the daring decision to send Apollo 8 into lunar orbit in the name of getting American men to the moon ahead of the Soviet Union. On Christmas eve, the crew – Frank Borman, Jim Lovell, and Bill Anders – famously read from the book of Genesis. (Left, an artist’s concept of Apollo 8 firing its main engine to return to Earth.)

Sent with only a Command and Service module, the mission is often considered one of NASA’s greatest risks of the space race. But there were other equally audacious lunar missions in the planning stages long before NASA had a viable mission with Apollo 8. As early as 1961, the agency considered sending men to the moon, and even landing them on the surface, with a Gemini spacecraft. END_OF_DOCUMENT_TOKEN_TO_BE_REPLACED

With the exception of Apollo flights, manned spaceflight has operated exclusively in low Earth orbit, the area in space that extends up to about 1,300 vertical miles. In 1966, the Gemini XI crew set an as-of-yet unbroken altitude record within low Earth orbital flights. Using the Agena’s engine, Pete Conrad and Dick Gordon reached an apogee (peak distance from the Earth) of 850 miles; most Gemini missions, and missions since, have operated under the 200 mile altitude. (Left, Dick Gordon during an EVA. 1966.)

So why did Gemini XI get to fly higher than any other mission? In short, because Conrad wanted to.  END_OF_DOCUMENT_TOKEN_TO_BE_REPLACED

Flight director Gene Kranz is perhaps best known as the man behind the team that got the Apollo 13 crew home safely. He is also known for his trademark flattop hair style and his vests. In training and during missions, he was rarely seen without a vest over his button down shirt. But these vests were more than just a fashion statement. Inseparable from the man who wore them, Kranz’s vests became symbolic of the “can-do” attitude mission controllers adopted when dealing with emergencies in space. (Left, Kranz eats at his console in the Mission Operations Control Room in Houston. 1965.)

So just how did a vest become such a powerful symbol? END_OF_DOCUMENT_TOKEN_TO_BE_REPLACED

Over the last few days, I’ve been doing some research into the USAF Dyna-Soar or X-20 program, and its story is much more interesting than I realized. Like many of the unrealized programs of the early space age, its impact extends far beyond its immediate application. Dyna-Soar is typically referenced in passing as an upgraded version of the X-15, an aircraft capable of achieving orbiting, but this connection is misleading. Dyna-Soar came from an entirely different place than the X-15, and its story is much more complicated than a simple cancelled research program. (A worker inspects a full-scale mockup of Dyna-Soar. Reader’s Digest described the vehicle as a cross between a porpoise and a manta ray. Early 1960s. Photo: Smithsonian Air and Space Museum.) END_OF_DOCUMENT_TOKEN_TO_BE_REPLACED

For the past few months, I’ve been contributing short articles to Motherboard. This week, I worked on a fun one I thought I ought to share: how to go to the bathroom in space and on the moon. I’ve put together a very brief history of the addition of ‘restroom facilities’ into NASA’s space race era missions. Check out the full article.

(Pictured, a diagram showing the Apollo urine collection and transfer system as it is meant to be worn over the liquid cooled undergarments.)

Regular readers of Vintage Space are doubtless aware that I have a tendency to link newer posts to older ones. This reflects the interrelation of all the topics I have (and will) discuss in this blog. I find this era of history to be complex (as most big historical eras are) with aspects that can be treated independently, but need to be contextualized by one another.

And so I thought I would begin mapping Vintage Space, building a sort of narrative roadmap that will give the more casual reader a better idea of where in the history of space and spaceflight each individual episode belongs. This is in no way a complete chronology, but rather a framework for my content. (Pictured, the sun rise above the gulf of Mexico as seen from orbit by Apollo 7. 1968.) END_OF_DOCUMENT_TOKEN_TO_BE_REPLACED