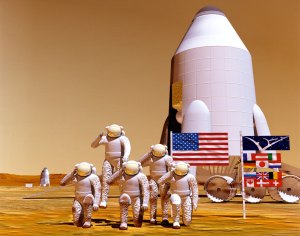 As part of my ongoing interest and fascination with proposed manned missions to Mars, I finally made my way through Robert Zubrin’s ‘The Case for Mars’. In it, he outlines a plan for a mission called Mars Direct. Coming from the Mars Society, of which Zubrin is president, the mission outlines how we can get astronauts to Mars armed with everything they need for the journey, including a spare return vehicle. The plan was first proposed in the late 1980s; Zubrin’s ‘The Case for Mars’ was first published in 1996. In recent years, the Mars Society has become more forceful in its attempts to see Mars Direct (literally) take off. Zubrin has gone so far as to declare that we are now more prepared to go to Mars than we were to go to the Moon in 1961 when Kennedy pledged the nation to a landing on its surface. I’m not sure I agree. (An artist’s concept of a multi-manned mission after landing on Mars.) END_OF_DOCUMENT_TOKEN_TO_BE_REPLACED 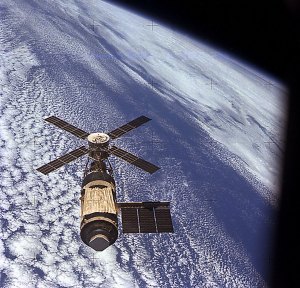 In previous posts I’ve mentioned, albeit in passing, the Apollo Applications Program (AAP) – it was one of the possible applications of the Rogallo paraglider wing after the system was cancelled from the Gemini program in 1964. AAP was the follow-up program to Apollo, the program that would reemphasize science over technology in spaceflight. The program intended to solidify man’s presence in space, expand his understanding of the solar system and the cosmos, and exploit space to satisfy our needs on Earth. This post gives only a cursory overview of the short-lived Apollo Applications Program, but it promises to be the first of many. Over time, I hope to put together a comprehensive picture of the program. (Pictured: Skylab. 1974.) END_OF_DOCUMENT_TOKEN_TO_BE_REPLACED

In previous posts I’ve talked a little about the challenges of landing on other planets. A planet’s unique composition and gravity have a major effect on a spacecraft’s entry into and descent through the atmosphere, as well as its landing on the surface – more simply, the spacecraft’s EDL. One central problem associated with interplanetary missions that has always fascinated me is the problem of testing EDL systems without being able to simulate the target planet’s environment. (Pictured, an artist’s concept of the Mars Pathfinder mission’s terminal descent and landing.)

Take Mars for example. The planet’s atmosphere is one percent as thick as the Earth’s and Martian gravity is one-third that felt on Earth. It’s impossible to simulate these conditions. Individual systems can be tested separately in approximate environments, but the only time the whole system will go through the stages of EDL is when it arrives at Mars.

In looking up results from Martian EDL systems tests, I kept turning up information on parachutes. I’ve never thought any aspect of spaceflight was simple, but I also never thought parachutes were very interesting. Turns out they are. For the moment, I’m going to limit myself to Mars landings and the Mars Science Laboratory (MSL) in particular. Set to launch in November 2011, MSL will use the brilliant yet frighteningly complex Sky Crane landing system to deliver the rover Curiosity to the surface.

But if the Sky Crane is going to have a chance to do its job, the whole MSL payload is going to have to enter the atmosphere and slow to a speed where its retrorockets can take over. That is the job of its parachute. END_OF_DOCUMENT_TOKEN_TO_BE_REPLACED

In a previous post, I looked at the Rogallo paraglider wing landing system and its failed development as part of NASA’s Gemini program. I also mentioned that the landing system didn’t disappear right away. After its cancellation from Gemini, NASA attempted to salvage its research and incorporate the landing system in Apollo and its follow-up programs. The US Air Force also expressed interest in including the Rogallo wing into its own space program. Regardless of the extra attention, it would seem that the paraglider was doomed to never leave the ground. (Left, a model Gemini capsule with Rogallo wing in a wind tunnel test. 1961.) END_OF_DOCUMENT_TOKEN_TO_BE_REPLACED