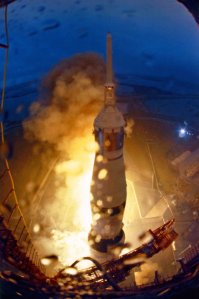 At 11:22 in the morning on Friday November 14, 1969, Apollo 12 launched from Kennedy Space Centre towards the Ocean of Storms on the near side of the Moon. It was a nominal launch, at least for the first 37 seconds. Then all hell broke loose, threatening to end the mission before it had even begun. (Left, the view of Apollo 12 on its Saturn V just before liftoff after NASA had committed to the launch. The dark skies and rainy weather are clearly visible in this shot.)

During countdown to launch, the biggest problem was the weather. It was cool and rainy day with winds reaching nearly 16 miles per hours. But it was better than the day before when lightning and thunderstorms had ripped through the Cape making launch impossible. Apollo 12 only held the launch countdown for weather a couple of times. Wind and rain weren’t an issue for the Saturn V launch vehicle. It was a lightning storm that would force NASA to cancel the launch. But the lightening never came and Apollo 12 lifted off on schedule. 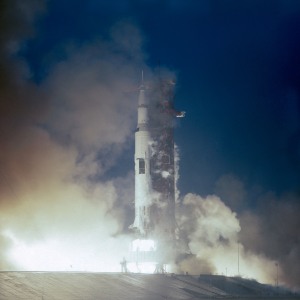 The Saturn V lifted slowly from the pad as the arms and pins keeping it in place released. It took a full 12 seconds for the mammoth rocket to clear the launch towed. Commander Pete Conrad made no secret of his jubilation. “That’s a lovely lift-off! That’s not bad at all!” The crew nestled into their Command Module (CM) Yankee Clipper were on their way to the Moon. (Right, Apollo 12 lifts off.)

Out of the corner of his eye, Conrad saw a flash of light At the same time he felt the Saturn V shudder. Almost immediately after his headset was filled with static, but it didn’t drown out the unmistakable sound of the CM’s master alarm. Conrad called to Houston, a little breathless and a hint of panic in his voice: “Okay. We just lost the platform, gang. I don’t know what happened here; we had everything int he world drop out.” Capcom Gerry Carr couldn’t say anything but the standard reply of “Roger.”

When Conrad called back to mission control, the gravity of the situation became clear. “I got three fuel cell lights, an AC bus light, a fuel cell disconnect, AC bus overload 1 and 2, main bus A and B out.” 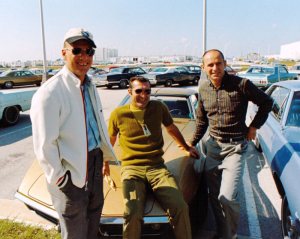 In English, the spacecraft’s power system looked to be deeply damaged. The Apollo CM was powered by fuel cells in the Service Module (SM). During launch, batteries in the CM backed up the fuel cells but otherwise they remained off, reserved for the spacecraft’s reentry and splashdown when they would be the sole power source. The myriad of lights illuminating inside Yankee Clipper told the crew that the spacecraft had lost all power and was using its reentry batteries. If this was the case, the Saturn V would put the crew in orbit in a dead spacecraft, a bad situation that ran through Conrad’s mind. He closed his hand around the abort handle, ready to turn it and lose his lunar mission if he had to. (Left, the Apollo 12 crew. From left: Conrad, Gordon, Bean.)

In the right hand seat, Lunar Module Pilot Al Bean couldn’t figure out what was going on. If the spacecraft was working on batteries, the only explanation that made sense was that the launch abort system had fired and physically separated the CM from the rest of the Saturn V stack. But he hadn’t felt the telltale acceleration associated with a launch abort. He also saw that the spacecraft’s power was diminished but not gone. Instinct told him that if it wasn’t broken, he shouldn’t try to fix it. If there was power, they weren’t lost yet.

The engineers and in mission control mirrored the confusion that reigned inside the spacecraft. For flight director Gerry Griffin, the situation couldn’t have been worse. This was his first flight as lead flight director and less than a minute in he was facing a potential abort situation. He didn’t know what to do, and certainly didn’t want to abort if he didn’t need to. He asked his environmental control engineer, EECOM John Aaron, to work the problem. If things in the spacecraft got squirrely, EECOM was generally the go to guy to fix it. 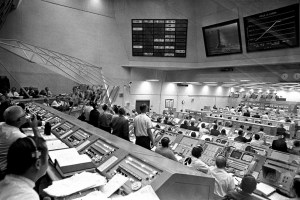 From his console in mission control, Aaron’s instinct was to look at the lights on his panel didn’t help. Everything was lighting up. To make matters worse, the data on his screen had been replaced with gibberish numbers. Still, it wasn’t zeroes, and the pattern was somehow familiar to him. He just had to figure out why. (Right, the scene in the firing room at Kennedy Space Centre right after the incident.)

Aaron had seen that same change in data before. Towards the end of 1968, he was sitting in that same seat watching a simulated launch at Kennedy Spaceflight Centre. It was part of his familiarization with launch activities and training in monitoring the spacecraft. The normal data on his screen had momentarily changed from sensible data to gibberish then flipped back almost instantly.

Curious about the anomaly, Aaron got a hard copy of the test data the next morning then got in touch with controllers at Cape Kennedy. They grudgingly admitted that a test conductor had accidentally dropped the spacecraft’s power system to unusually low voltages before correcting his own error. That explained the change in data Aaron saw but didn’t explain the strange pattern the numbers took. (Left, John Aaron during the Gemini 5 mission in 1965. He was 24 during Apollo 12’s mission.)

He sought the help of an instrumentation engineer to solve the problem. It turned out that the low power levels had upset the signal conditioning equipment, a box of electronics that served the obscure role of translating information from sensors into signals that fed the displays in the spacecraft and on the ground. The box could bet set in the normal or auxiliary position; in the former setting it would turn off with low voltage and in the latter position it would continue to operate even under lower power conditions.

As he looked at the nonsensical data coming down from Apollo 12, Aaron remembered the instrumentation engineer’s final point: switch to auxiliary and you get your data downlink back. So he told Griffin what to do. “Fight, EECOM. Try SCE to AUX.” 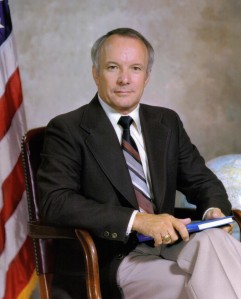 Griffin had no idea what that meant. “SCE to off?” he asked, unsure; he had been expecting Aaron to recommend an abort, not a command he’d never heard. “AUX,” Aaron corrected. Griffin passed the command to Carr, who looked at Griffin as if to say are-you-sure-and-what-the-hell-is-that but didn’t. He dutifully relayed the command to Apollo 12 with a confidence in his voice he didn’t entirely feel. Meanwhile Griffin asked Aaron where in the spacecraft the crew could find this famed SCE switch. If Carr, an astronaut, had no idea where or what it was, it was entirely possible the crew aboard Yankee Clipper didn’t either. (Right, Gerry Griffin in his 1983 NASA official portrait.)

Conrad’s reply confirmed Griffin’s suspicions.  “Try FCE to auxiliary. What the hell is that?” “SCE – SCE to auxiliary” Carr corrected. “SCE to AUX,” Conrad called back in confirmation. Bu he still didn’t know where or what it was. Command Module Pilot Dick Gordon in the centre seat was equally clueless. 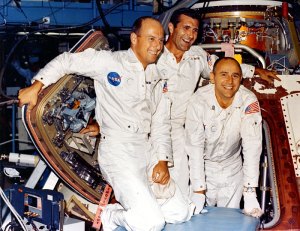 It was Bean who knew where the switch was, and changed it from normal to auxiliary without hesitation. By the time Griffin turned to Aaron to ask again where the crew could find this mythical SCE switch, everything had changed. “We got it back, flight,” Aaron said before Griffin could open his mouth. New and correct data was starting to come back from the spacecraft. Aaron advised Griffin to have the crew bring fuel cells 1 and 2 back online – connect their power to the CM again. Bean dutifully carried out the command after the Saturn V’s first stage fell away and its second stage kicked to life and shot the crew higher. Fuel cells 1 and 2 came back online followed by fuel cell 3 moments later. The spacecraft was starting to look like it was alive and well. (Left, the crew pose during a pre-flight checkout of their CM.)

Conrad was the first to hazard a guess at what had happened. “I’m not sure we didn’t get hit by lightning,” he told Houston. 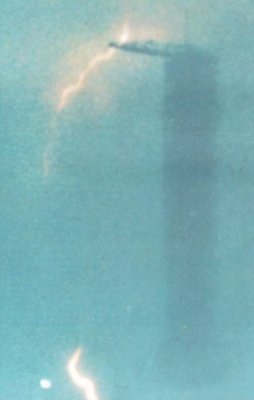 That was exactly what happened. During launch, the Saturn V’s metal body and the trail of exhaust turned to rocket into a lightening rod. Lightning struck the rocket and traveled down its contrail all the way to the launch pad where it struck the tower. Reporters and observers on the ground, as well automatic movie cameras trained on the launch pad, confirmed the lightning theory. (Right, the lightning that traveled down Apollo 12’s contrail.)

The crew gradually brought all their systems back up and confirmed their navigational system that had been knocked out by a second lightening strike.

With the problem under control, Conrad resumed his lighthearted manner. Chuckling, he told Houston, “Hey, that’s one of the better SIMs, believe me. Phew! Man alive!” “We had a couple of cardiac arrests down here too, Pete,” Carr called back. “Can’t say that I’ve ever seen that before. Man alive –” added Bean. Gordon chimed in with “God darn Almighty! Wasn’t that something, babe?”

The crew started laughing, going over each other’s reactions. “That was something else… There were so many lights up there I couldn’t even read them all,” laughed Gordon. “I was looking at this; Al was looking over there –” “We’re all chuckling up here over the lights’ we all said there were so many on we couldn’t read them all,” Conrad told Carr.

The crew of Apollo 12 didn’t stop laughing until they reached orbit.

David Harland. Apollo 12 on the Ocean of Storms. Springer Praxis. 2011.