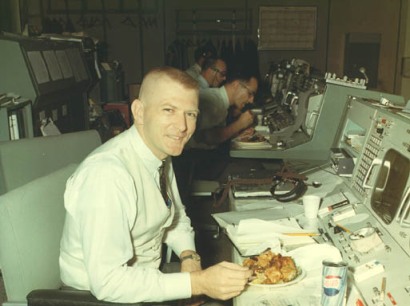 Flight director Gene Kranz is perhaps best known as the man behind the team that got the Apollo 13 crew home safely. He is also known for his trademark flattop hair style and his vests. In training and during missions, he was rarely seen without a vest over his button down shirt. But these vests were more than just a fashion statement. Inseparable from the man who wore them, Kranz’s vests became symbolic of the “can-do” attitude mission controllers adopted when dealing with emergencies in space. (Left, Kranz eats at his console in the Mission Operations Control Room in Houston. 1965.)

So just how did a vest become such a powerful symbol?

When NASA began sending men into space, it was vital that controllers on the ground be able to monitor the spacecraft in orbit. This led to the creation of mission control, the ground-based copy of all spacecraft systems envisioned by former NACA engineer Chris Kraft. Kraft joined NASA’s Space Task Group — the group charged with putting a man into orbit — as head of the flight operations devision in 1958. This position led to his eventual role as NASA’s first flight controller with the Mercury program. Under his direction, mission control ran countless simulations to create mission rulebooks, basic go/no-go decisions the controllers could rely on during an actual flight. (Kraft, facing the camera, lights cigars for Maxime Faget and George Trimble after Apollo 11 landed on the moon. He’s not wearing a vest. 1969.)

A single flight controller was fine for the short-duration Mercury flights, but as missions became longer with Gemini, a division of labour became necessary. The twenty-four hour day was broken into three eight-hour shifts, which created the need for three mission control teams. Each was designated by a colour. As senior flight director, Kraft took most of the senior controllers and created the red team. Kraft’s deputy John Hodge had second pick of controllers to make up his blue team. As the most junior flight controller, and the youngest at 37, Gene Kranz and the remaining junior controllers became the white team.

Kranz was slightly anxious about his team — not that their youth or inexperience would be a detriment, but that they might feel inadequate. Just because they had been selected last didn’t mean they were the leftovers. To boost morale, Kranz as their leader wanted some insignia for his team to rally around. His wife, Marta, suggested a vest: Kranz loved the three-piece suits that were in style at the time, and she loved to sew. In 1962, she suggested she make him a white vest to wear at his console (pictured).

Kranz wore his first white vest on Gemini 4, and it was an immediate hit with his team. He also became lead flight controller during that mission. During the first shift, Kraft turned to Kranz, said “you’re in charge,” and walked out.

The white vest quickly became a tradition. Marta Kranz would send over a new white vest for the start of every mission, and send over a second vest for splashdowns. These second vests were bright and flashy, meant to be worn in celebration of a successful mission. For Gemini 9’s splashdown, it was a brocade gold and silver vest (pictured on the right). For Apollo 17, Kranz ended the mission wearing a vest with red, white, and blue sequined stripes.

Kranz served as lead flight director for all Gemini missions except Gemini 8, and every odd-numbered Apollo missions. This put him at the console when Apollo 11 landed on the moon and when Apollo 13’s oxygen tank exploded. This latter mission has spawned perhaps the most famous vest of his collection.

During the first shift of Apollo 13, Marta sent Kranz a simple white vest made of faille — a fine-grained fabric of silk, satin or cotton popular in the 1950s — with a pin of the Apollo 13’s insignia on the left side. In Ron Howard’s film Apollo 13, the launch scene shows Ed Harris as Gene Kranz putting on a replica vest while his team of controllers claps and an off-screen controller says, “Hey, Gene, I guess we can go now!” (Left, Kranz’s Apollo 17 splashdown vest.)

When the oxygen tank exploded, crippling the spacecraft and destroying the crew’s chance for a moon landing, Kranz switched into crisis mode. His white team temporarily  became the Tiger team, and they didn’t stop working until the crew splashed down. There was no celebratory vest at the end of this mission since the crew never landed on the moon, but Kranz wore his white vest in celebration nonetheless.

Gene Kranz. Failure is Not an Option. Simon and Schuster. 2000.